You Gave Me The "I'll Love You Till I Die" 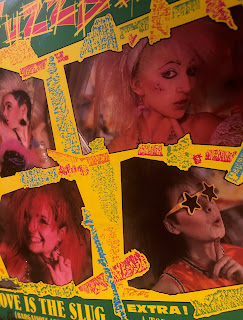 Rummaging through my vinyl, I unearthed this delightful 12" single by We've Got A Fuzzbox And We're Gonna Use It!!, an all-female four-piece from Birmingham who I absolutely adored, from their mid-1980s alternative origins to the end of their pure pop phase at the start of the 1990s.

Love Is The Slug is a brilliant post-break up song, evoking teenage memories of going to the school disco and seeing your ex with someone else. The 12" single offered up the Bargainous Longerer Mix which doesn't outstay it's welcome and manages to come in under the four minute mark. 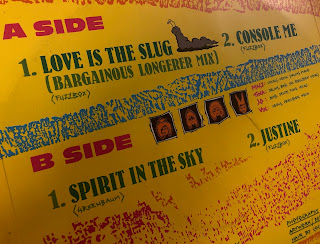 This was (I think) Fuzzbox's second single, on the wonderful Vindaloo Records and produced by label founder and The Nightingales frontperson Robert Lloyd, with added polish by Martin Rushent. 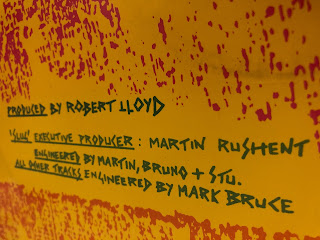 Rest assured, the photographer is not the convicted criminal Hairy Cornflake but then Birmingham-based music snapper Dave Travis. 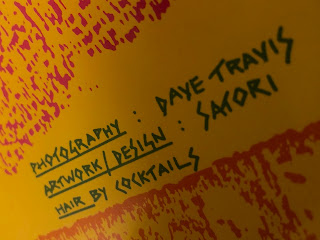 I haven't seen the video for Love Is The Slug in at least three decades and it's just as much fun, fun, fun as I'd remembered. Tina O'Neill on drums provides a convincing 1980s update of Bingo from Banana Splits.
The 7" single featured three songs; the flipside of the 12" single includes a fourth, a cover of Norman Greenbaum's 1969 hit Spirit In The Sky and I've found a 1986 performance on BBC2's Whistle Test (by then no longer Old and Grey). I prefer this to the Doctor & The Medics' version which was a #1 hit in the UK later the same year.
On my dive into the YouTube rabbit hole to research this post, I came across a show called First Sight, also from 1986, which was broadcast on cable/satellite channel Music Box. This was way off my radar as I was well into the 1990s, possibly the early 2000s, before I had anything more than the standard four, then five, terrestrial TV channels.
First Sight is a tried and tested format of a panel watching then commenting on a series of music videos. This edition features Magz Fuzzbox aka Maggie Dunne, Jane Eugene from Loose Ends and Dante Bonutto, then journalist with Record Mirror and Kerrang! It's split into two parts and well worth a look.
Part two is worth the price of admission alone for Dante Bonutto's paraphrasing a ZZ Top quote to describe a Michael McDonald song as "like a Robin Reliant with three flat tyres being towed across a muddy field by a Datsun Cherry".
We've Got A Fuzzbox And We're Gonna Use It!! subsequently signed to a major label, shortened their name, had a complete makeover and enjoyed proper chart success in 1989, including Pink Sunshine, the follow up to #11 breakthrough International Rescue, which got to #24 and preceded second album Big Bang! which peaked at #5 a few months later. I loved them still.
Sadly, planned third album Out Of This World wasn't finished before Fuzzbox split due to musical differences. They reformed minus Tina O'Neill in 2010 and toured for the next two years. I've found a lovely 2010 interview with Vix and Foxy aka Victoria Perks and Jo Dunne ahead of their appearance at the Folk On The Water festival. Tragically, Jo was diagnosed with cancer and died in 2012, far too young at 43.
Vix and Magz reformed the band with a new line-up in 2015 and released We've Got A...Fuzzbox...And We're Gonna Use It!! Reimagined in May this year, re-recordings and reworkings of their back catalogue, including Love Is The Slug and Spirit In The Sky. Bostin', indeed.
at October 04, 2022

Email ThisBlogThis!Share to TwitterShare to FacebookShare to Pinterest
Labels: We've Got A Fuzzbox And We're Gonna Use It!!