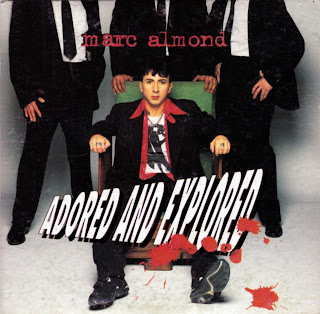 Adored And Explored was the lead single from Marc Almond's ninth album Fantastic Star, entering the UK singles chart at #25 in May 1995 and proving to be Marc's last Top 30 single to date.
The video is very much of it's time, though it's an entertaining send up of pop celebrity, from the 'dad dancing' and 'hand harmonica' miming at the start, through to a multitude of costume changes, taking in Bowie, Bolan, The Village People, Elvis, Alex from A Clockwork Orange, Boy George and more. Almond is supported by a group of 'minders' straight out of Reservoir Dogs, who amusingly break into a cod pogo and other bad dancing in the closing section of the song.
The harmonica on Adored And Explored is played by David Johansen and the song was co-written with John Coxon, better known (to me, at least) as one half of Spring Heel Jack and member of Spiritualized.
Marc has a new 6-track mini-album, Things We Lost, out next month. Much as I've enjoyed Marc's recent albums (2020's Chaos And A Dancing Star was a highlight), I won't be forking out £18.99 for the double vinyl. I'm also unconvinced that I want the expanded 3CD edition with Marc's full 37-song concert from The Royal Festival Hall in 2020, featuring Chris Braide and Ian Anderson of Jethro Tull, for £20.99 either. Here's hoping Things We Lost also gets a digital release at some point.