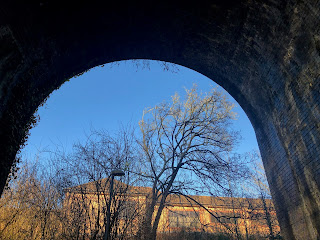 We first met in 1998, both working for the regional careers service, based in Bristol. Dave was in ICT, although I quickly learned that in his case it was most probably an acronym for irreverent, cool and tireless. We worked together for nearly 10 years and in that time must have shared thousands of hours of music, either swapping our latest finds and purchases, CD rips of DIY mixtapes or DJ mixes or experiencing it firsthand at various venues around Bristol and Bath.

Dave changed jobs in the mid-2000s and we kept in touch. One of the last gigs we saw was Green Gartside at the Arnolfini in June 2007 as part of the Venn Festival. In truth, it was the full Scritti Politti band, 9 songs in roughly 45 minutes. One of the best gigs we'd ever heard.

I attended Dave's service at South Bristol Crematorium on 29th January 2009. There was much to celebrate about his life and, of course, he curated his final playlist and it was impeccable.
So What: Miles Davies (1959)
All The Young Dudes: Mott The Hoople (1972)
Soul On Fire: Spiritualized (2008)
Two Sevens Clash: Culture (1977)

In 2010, Anita Blay aka CocknBullKid released her variation on Amazing Grace. This may be the only song in my collection that includes the name Dave in the title, but it's a good one.

and the old life that we lived so fondly together is untouched, unchanged.
Whatever we were to each other, that we are still

Source: https://www.familyfriendpoems.com/poem/death-is-nothing-at-all-by-henry-scott-holland
the old life that we lived so fondly together is untouched, unchanged.
Whatever we were to each other, that we are still.